The crazy DIY tour across Asia

The guys from “Stillbirth”, a death metal band from Hagen, Germany, have booked themselves an incredible tour across Asia. I know them personally as my tour van customers (when they aren’t gallivanting around in Asia) and I’m simply thrilled by the band’s organizational talent and adventurous spirit. I was eager to hear from Stillbirth’s singer, Lukas, about how they managed to plan such a crazy tour and and how it went.

I heard that your Asian tour was a huge success. Where did you tour and how many shows did you play?

We played in a total of 11 different countries on this tour; we crossed international borders almost every day.

We started at “Deathfest” in Wermelskirchen, Germany, and from there we went straight to Frankfurt Airport to catch a plane to Dubai. Our first stop was already cutting it very close, because our plane arrived at 7.30 pm in Dubai and the show started at 8. Waiting for the suitcases and the security check was a bit stressful, but we managed to play on time.

From Dubai we took a plane to India. There we played in Hyderabad, Mumbai, and Delhi. Since the cities were very far apart from each other, we did fly from city to city.

Sometimes it wasn’t worth going to sleep, because the shows were over at 3 am and we had to be at the airport at 5 to catch the next plane.

After this show we had two days off in Bali. Without these two days, I’m pretty sure we would have died. We rented a private villa with our own pool and until that point, we had a maximum of sixteen hours sleep in nine days. Bali saved our lives.

The next flight went from Delhi to Kathmandu, Nepal. The event started at 3 in the afternoon and our stage time was at 5, because otherwise there might have been problems with the police. We actually liked this schedule though, because we got to go to bed early. But we made the plans without the Nepalese beds; they were harder than concrete. So it was another night without sleep.

From Nepal, we made our way to Phnom Penh. The promoter was a guy from Germany, he was trying to establish a metal scene in Cambodia.

Afterwards, we went to Ho Chi Minh City in Vietnam and from there to the “Death Metal Mecca” Jakarta in Indonesia. After this show we had two days off in Bali. Without these two days, I’m pretty sure we would have died. We rented a private villa with our own pool and until that point, we had a maximum of sixteen hours sleep in nine days. Bali saved our lives.

Next stop was Manila, Philippines, then Taipei in Taiwan, and then Tokyo. Our next destination was Seoul, South Korea, and our last stop was in Bangkok, Thailand. 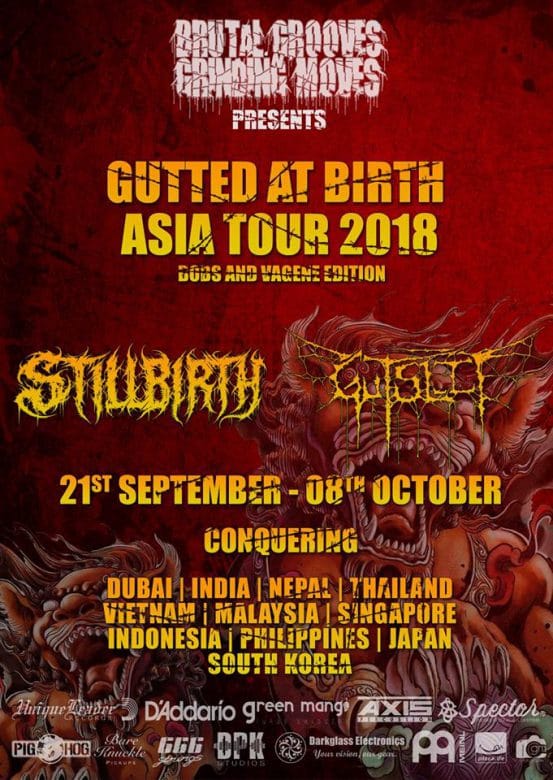 How did you even come up with the idea to do such an expansive tour?

We came up with the idea for the tour with our good friends from the Indian band Gutslit. We went on a “full European tour” with them twice and wanted to do the same thing in Asia. But we never thought that we would really do it. A few cities and shows, maybe, but no one has ever done a “full Asia tour” to this extent.

How did you plan all of this, and how long did it take?

We planned everything with Gutslit. Since Gutslit had good connections in Asia and we already built a name for ourselves, the implementation was not as difficult as you’d expect. Everyone knew at least one promoter in each country who could help.

It must be said that the number of promoters of death metal events is not that high in Asia, so our options were limited. We decided on a route and worked back and forth a lot. After the first shows were confirmed, we booked the flights. Sometimes even without knowing if we got a show. In the end, however, we were able to get all the shows booked.

The entire planning process took us about a year; logistically, it hasn’t been that easy.

When it comes to touring, the transportation of instruments is always a big concern as they often get lost or damaged. What experiences have you had in that regard?

We had our instruments and a big suitcase full of merch with us. In Indonesia, we reordered more merch. Everyone had a small hand luggage bag for his clothes and that’s about it; we were pretty spartan. We were traveling for three weeks and had about four days’ worth of clothes. We had to budget a little to make sure that we wouldn’t arrive at the airport stinking like hell.

The transport of the instruments went surprisingly smooth. Each airline brought the cases safely to their destination and nothing got damaged. That surprised us a lot, considering that KLM lost our merchandise suitcase on our Finland tour once on the way there and then again on the way back.

Were there any problems with the visas? Did you need certain visas for entry as a band, or perhaps working visas? To what extent did the organizers help you with this?

Since we are all German citizens, we had almost no problems with getting visas. Before the tour, we only had to get a visa for India, which cost about 120 euros per person. In Nepal, the entry process was also a bit more complicated, with a lot of jumble.

Indonesia was the only country where we needed a working visa. I think we also were supposed to have work visas in other countries, but the costs were too high, so we muddled through as tourists.

In Indonesia, however, there were border officials at the gig. They checked everything and gave the permission for the show only then. It could have been that everything had been rejected, even though we were already in Jakarta.

The only promoter who helped us with the visas was the guy from Indonesia. The rest didn’t really care. Probably because of the fact that we mostly needed only visas on arrival. Our tour compadres from Gutslit on the other hand had more problems. Gutslit’s singer and merch guy did not get visas for Taiwan and Japan. So, I had to help out with the vocals. It worked. 🙂

The scene was completely different than in Germany and Europe. People were very welcoming and you felt like a rock star. After every show, the fans wanted to take a million photos with us, they actually formed lines and it felt like work at some point. Sometimes people have queued three or four times to take more photos with us. But we didn’t notice it at first, haha. We are all big guys around 1.90 m (6ft 2in), much bigger than the average concert goers there, which had a funny effect on the photos.

The fans went mad at every gig. When you shouted “and now I wanna see a circle pit”, it was realized immediately. A dream for each band.

The best performances were the shows in India (all of them) and Indonesia. In Mumbai, we even had a double Wall of Death during the last song. People stormed the stage to party with us, and then we prompted a Wall of Death in the midst of a song. On command, the fans down in front of the stage and those on stage set off running at the same time and destroyed everything. It was awesome!

I could tell you a million stories about the whole trip and each city. We have experienced a great deal and it was a once-in-a-lifetime opportunity, even though we reached our limits during the trip.

Can you tell me a little anecdote about your tour?

We were in a restaurant in Nepal and the boss asked who we were. Then he played our music, on full volume, haha. All the other guests had to endure death metal for half an hour.

This is called “broadening your horizon”, I believe. Some of the countries you toured have a particularly high poverty rate. Have you noticed this personally, even though the concert goers probably belong to the well-off part of the population?

We saw some of the poverty, and the concert goers came from all backgrounds. Some admission fees were also so cheap that people of all backgrounds could afford it. Only Japan and South Korea were extremely expensive from our point of view. The ticket prices lay between 35 and 45 euros for only five bands and we were the headliner. But it seemed to be normal in those countries.

Every one, whether they were fans or not, were super friendly and very accommodating. Rarely have we experienced such warmth and cordiality.

Did you even get any fees or expense allowances, and how much did all of it cost you in the end?

The payment was not a problem for us at first. We knew we would lose money, and we adjusted to it. We’ve got between $100 and $300 per evening. Which partly did not even cover the flight costs.

With selling merch we could earn something extra, but we had to adjust the prices strongly to the countries. While in Indonesia you got about 6 euros for a shirt, in South Korea it was about 25 euros. But the good news was that we had catering every night and a place to sleep. Try to get that in the UK or the US. They just laugh at you. In total, we have put about 1,500 euros per person on it. The total costs were about 13,000 euros. Maybe even a little more.

What would you do differently next time?

Since we already have the experience of the full-Asia tour, next time we would travel to fewer countries and then more cities per country. We were mostly only in one for a day before flying somewhere else. You definitely need a day-off every two or three days to regenerate. Unless you stay in a country where you can drive to the next gig by car. Flying wears you out and the jet lag doesn’t do the body any favors either.

And which part of the world do you intend to tour next? 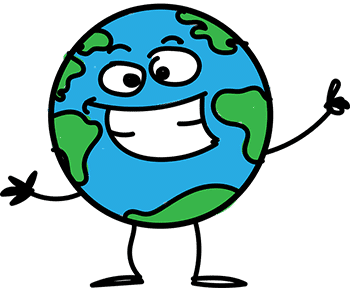 Our next big goal is a full South America tour. We already started planning it. If all goes well, we will be touring Mexico, Colombia, Peru, Chile, Argentina, Brazil, Uruguay etc. in 2020.

We are thinking about South Africa for 2021, and Australia and Canada are also on our list. Once we are done with all of that, we’ll take things a little easier and try to do such tours only if we do not have to pay on top. Until then, there’s still a lot of work to do, haha!

I wish you guys a lot of fun on your future tours, even if I already get dizzy listening. I wouldn’t be surprised if I hear about Stillbirth’s Outer Space Tour in ten years’ time. Do you have a final word for the readers?

Thank you very much for the interview and thanks for the support! This tour could fill a podcast for hours. If you, as a band, ever have the opportunity to do such a tour, do it. The effort is worth it, especially for the experience.