Diesel driving bans and the future of touring in Europe

Europe’s shocked inhabitants recently learned that car exhaust fumes are bad for people and the environment. At least that’s what it seems. While we’ve all actually grown up knowing that car emissions can have negative consequences for people and the environment, it’s only the aftermath of the emissions scandal, also known as “Dieselgate,” that seems to have had radical consequences. It’s clear that traffic, as we know it, is facing massive changes. But what impact will this have on touring in the next few years?

Most tour buses that operate in Europe are diesel vehicles, as they are considered to be much more robust compared to gasoline vehicles, especially for very high mileage.  Furthermore, diesel engines are generally more economical. In some countries, such as France or Germany, diesel is also subsidized, so that it is significantly cheaper than gasoline, which means a large cost difference for touring bands.

At the moment, fewer diesel vehicles are registered than ever before. The exhaust scandal prompted this development. Through years of manipulation, various car manufacturers’ legal limits for car exhaust gases were bypassed. Now the responsibility lies not only with the car industry, but also with the cities.

In 2017, the European Commission issued a final warning against several member states as they were unable to meet air quality standards for harmful nitrogen oxide emissions. Germany, France, Spain, Italy and the United Kingdom were invited to take measures to improve air quality.

Many major European cities are faced with imminent penalties for non-compliance with these standards. As a result, the major cities concerned will introduce driving bans on diesel vehicles, which are allegedly responsible for a large proportion of nitrogen oxide emissions.

In France, the price of diesel has already increased. Paris is planning a complete ban on diesel vehicles by 2025. Trucks and buses built before 1997 have not been allowed to drive in the city center since 2015, and since 2016, older cars are not allowed to enter the environmental zones during the day. More information is available here: https://www.crit-air.fr/en.html

In Germany only a small part of the now approved diesel buses will be allowed to drive to certain inner cities in the next few years. This not only applies to the largest cities such as Cologne, Munich, Berlin, Hamburg, Dusseldorf or Frankfurt, but also a whole range of smaller cities such as Stuttgart, Aachen etc.

Even new diesel vehicles can fall under the driving restrictions. In Europe, so-called Euro standards set limits for the emission of air pollutants for motor vehicles.

Studies by the German automobile club ADAC have shown that cars that meet the “clean” Euro 6 standard in laboratory tests often also clearly exceed the limits for nitrogen emissions under real driving conditions. Vehicles with the Euro 6d standard are currently the only ones that are safe from driving bans.

In Hamburg, there have already been driving bans since May 2018, but only for sections of two roads, the Max-Brauer-Allee and the Stresemannstraße. More than 20,000 vehicles from Hamburg are affected. 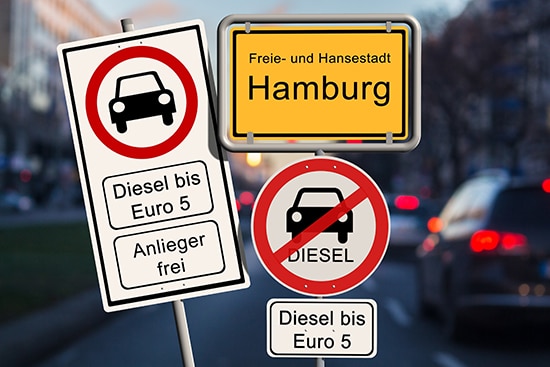 Similarly, Madrid announced bans on diesel vehicles until 2025. Barcelona will banish older diesel and petrol engines from the streets as early as 2019.

Likewise, for example, Oslo, Stockholm and Athens have to deal with the problem and are planning measures to reduce nitrogen oxide emissions.

For vehicles registered abroad, no exception will be made in the said cities. For example, as has been the case in London for a long time, foreign vehicles are classified according to local emission classes, and may need to dig deep into their pockets to get into the city at all.

This page provides an overview of the current urban access restrictions across Europe: http://urbanaccessregulations.eu/low-emission-zones-main/emergency-alternating-number-plate-diesel-ban-traffic-bans

It will be interesting to see what new concepts for cleaner transportation the cities will develop in the coming years. Issues such as free public transportation, car-free inner cities, switching to car sharing, electric cars and bicycles are being discussed.

Most bands tour with diesel buses

For most bands, touring is affordable only because of affordable fuel and more economical and more robust diesel buses, which is why the entire tour industry has long been tuned to diesel.

Unfortunately, most of the “dirtiest” cities also have the most clubs where artists perform. Even if the affected cities are still considering exemptions for urban diesel vehicles, craftsmen, taxis, etc., the transporting of artists and their equipment doesn’t enter the discussion naturally. 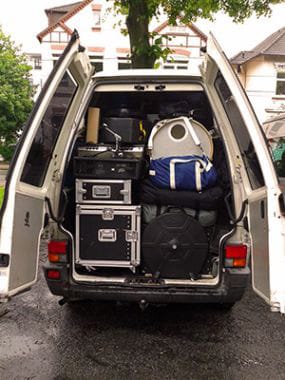 With buses that do not comply with the emissions standard, bands may then only be able to tour with a kind of park + ride system. Then the diesel vehicle would have to be parked outside the prohibited areas of the affected cities and the band would be picked up by gasoline buses and taken to the club. There are some such systems for coaches already, which cannot reach all clubs because of their size. See also How about touring in a sleeper bus?

In countries where equipment is provided by the clubs, the question of transportation of the equipment is solved, but nevertheless the band members have to travel long distances.

Tours will probably become more expensive at first. If the diesel subsidies disappear completely in the long term, diesel will cost at least as much as gasoline anyway. Also in Germany the end of diesel being subsidized is already being discussed.

Above all, many tour bus rental companies have to replace their vehicles, which not all will be financially capable of. This is associated with very high costs, which, of course, are also passed on to the customers.

LPG (Liquefied Petroleum Gas) could be an alternative for example, but converting diesel vehicles to diesel/LPG is financially not reasonable, which is why most LPG cars are gasoline cars. With the current LPG and diesel technology, tour van lessors would have to replace their diesel vans with gasoline equivalents. In Germany also the energy tax reduction for Autogas will be reduced starting in 2019. From that year onwards, subsidies are going to be by 20 percent lower each year, until they are completely eradicated. After that LPG will cost the same as conventional fuels.

Manufacturers such as Renault, Iveco or Mercedes-Benz are now producing electric utility vehicles, and there are already craftsmen who have converted to electric vans. However, the initial cost is very high, and anyway, this only works for shorter distances. It will be a very long time before there is a sufficient network for electric vehicles in Europe.