How about touring in a sleeper bus?

At some point in your musical career, you might wonder about the advantages and disadvantages of touring in a sleeper bus. Sleeper busses, also known as sleeper coaches, nightliners, or entertainer coaches exude an air of luxury. Still, there are pros and cons of touring in a coach and you have to decide if it’s the right time and place for it.

Can you save money with touring in a coach?

First: It only makes sense to tour in a sleeper bus if your band already has a certain popularity and also a good income. If the local promoters/venues agree to book you in a hotel and if they can save money when you spend the night in a sleeper bus instead, there is a chance that you get the money saved. The so-called “buy-out” could help you to pay the coach rental fee. 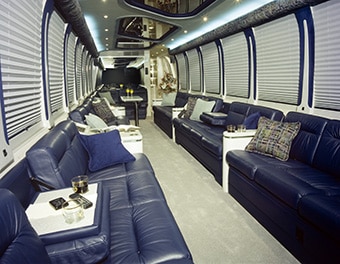 This, of course, only works if the local promoters make money with your show. If they don’t, they would rather keep the hotel money. With shows with less than 200 visitors nobody makes huge profit – not the local promoters, not the artist or anybody else who is involved.

Plan ahead – where will you tour and how long?

Often, smaller venues don’t have a parking space for a sleeper bus and it might not be possible to get to the venue due to small streets or access restrictions, especially in Europe. So, if you decide to tour in a sleeper bus, you should look at the possibilities before your booking agent starts to book shows. Then he or she can ensure that you will be able to reach the venues without the additional costs of renting smaller vehicles for the transport of your gear between the coach and the venue. However, some venues might have transport services of their own precisely for this purpose.

In some European cities, you must also ensure that your vehicle meets the emissions standards. For example, driving a coach, which doesn’t meet the standards in London, can be quite expensive. For more info, please check the official “Transport for London” page.

In the future, coach lessors will also have to keep an eye on possible environmental zones in European cities, as the conditions for diesel vehicles will be tightened further.

The efficiency of a sleeper bus also depends on the area where you will tour. For example, many venues in Germany have band flats available for bands to stay after the show. In other regions, local promoters don’t care for the accommodation. So, if you have to book hotels yourself, you could potentially save money with a sleeper bus.

Pros and cons of touring in a sleeper bus

For tour managers and drivers, however, a sleeper bus can make life easier as it’s harder for band members to disappear if the bus is your home and parked next to the venue. Everybody who tours a lot knows that a constant source of trouble is that band members forget their stuff at various sleeping places such as chargers, their favorite stage shirt, equipment parts, or even purses or passports. A sleeper bus minimizes the risk of that.

In countries with crowded highways and lots of traffic, sleeper buses are convenient if you can start after the show and drive at night. For the driver, that means night shifts, but also driving in a much less stressful environment, especially on longer drives. 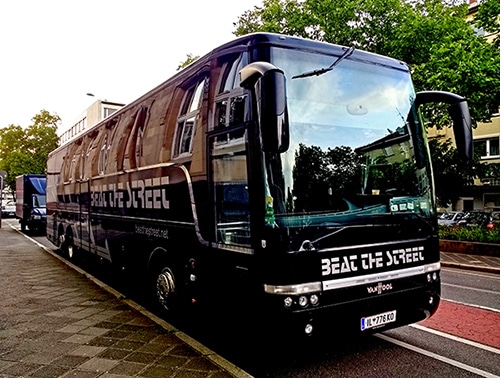 Driving a sleeper bus is a challenge for any driver and sometimes also for the passengers. If the driver has to take a break and sleep for a few hours on a highway gas station while you are wide awake, you might get really bored. While the driver is sleeping in his bunk, obviously everybody else should be quiet. In Europe, it’s nearly impossible to stop with a big bus in a city center so that you can do a little bit of sightseeing while the driver takes his/her well-deserved break.

Also, due to special speed limits for buses the drives can take longer in a coach than in a tour van.

Tips for touring in a coach

Touring in a sleeper bus with a single driver shouldn’t take longer than a week. If the tour is longer, the drivers should switch after a few days.

If you want or have to bring a backline, make sure that there is enough space in the bus so that you don’t need to travel with a trailer. The efficiency of a trailer depends again of the touring area and the speed limit for busses with trailers.