The truth about the Autobahn

“Where is the Autobahn?” – The myth about driving in Germany

A few years ago I was traveling with a band from the US. We drove from one German city to another. After a few days they asked me where the “Autobahn” actually was. After I understood that it wasn’t meant to be a joke, I explained to them that we have been traveling on it for days as “Autobahn” is just the German word for “Highway.”

Apparently, the boys had a mythical idea of the highway as a kind of superhighway, where the cars sped along at unimaginable speed, like the light cycles in the movie “Tron” or like the transport tubes in “Futurama”, only with cars instead of people.

The guys could not believe that this could really be the famous freeway on which we were making slower progress than they were used to from highways in the US. I also felt a little sorry for destroying their fantasies. Maybe I should have told them that you only get to the highway when you chase lightning strikes through an invisible gate at at least 200 kilometers per hour (125 miles per hour) and yell, “Faster, faster, faster!”

The legendary Autobahn is venerated and transfigured in all parts of the world. On a holiday in Romania, a friendly sales representative took us to the next town after we missed our long-distance bus. During the rather speedy journey over Romanian highways he constantly praised the German Autobahn. He raved about how fast you could drive in Germany and how nice it would be if they an Autobahn in Romania too. I was confused as in my opinion we made excellent progress on the relatively uninhabited Romanian roads. When it turned out that he had never been to Germany, I didn’t have the heart to tell him the truth. He probably wouldn’t have believed me anyway.

“And now for something completely different” – the reality

Perhaps this mythical idea of the Autobahn explains the incredible stretches that some bands believe can be coped with daily in Europe. I must admit that I have not rented a bus to several bands because of their tour routing, especially after an American band with daily distances of almost 500 – 800 kilometers (300 – 500 miles) had already had two accidents with a tour bus, one of them because the driver was asleep.

Therefore, bands that plan to tour Germany for the first time should better know the truth before they even start booking a tour.

Such long distances may be commonplace in the US and other more sparsely populated countries, but are not to be mastered in the densely populated areas of Europe, especially with a single driver. First of all, because of the high volume of traffic and the constant time pressure on tour, breaks are no longer possible. Secondly, fully loaded buses are driven far too fast, which can be quite dangerous.

In fact, there is no general speed limit on German motorways, but many generally frustrated speeders that are constantly interrupted just before their climax. They accelerate and accelerate, feel more and more awesome for a few minutes and then suddenly have to slam on the brakes and sneak through the next construction site at 80 kilometers per hour.

In reality, you can drive really fast on German highways, at least during the day, but only for short distances, always before and after the next construction site. In the construction zones, there is usually at least one lane less and a speed limit of 80 kilometers per hour. This usually leads to traffic jams, since one lane is already completely occupied by trucks. The truck traffic here is increasing by more than 2 percent annually. 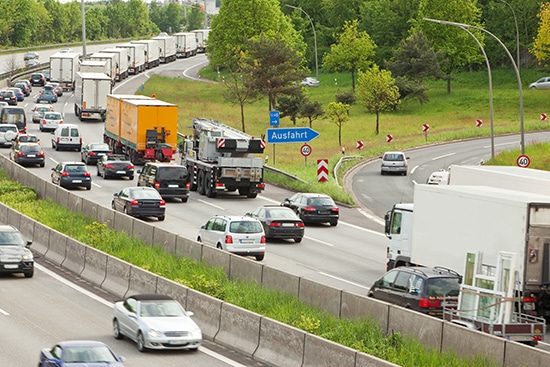 Currently (in the summer of 2018) there are more than 430 major construction projects on Germany’s motorways alone: https://www.adac.de/der-adac/verein/aktuelles/autobahn-baustellen/ (in German only). There are also hundreds of smaller projects that only take a few days to complete.

In Germany, unlike many other European countries, the roads are also toll-free and at the same time, public transportation is very expensive, which is why there is little incentive for motorists to leave the car and travel by train. In this permanently congested road network, congestion could only be avoided through proper driving. However, since such behavior can only be expected in the next stage of evolution, automated cars will probably be part of everyday life first.

Driving in Belgium or the Netherlands, for example, seems to be much more relaxed, especially because of the speed limits of 120 and 130 kilometers per hour. As soon as you cross the border into Germany, the racing and cutting starts, accompanied by daring full braking behind the next slow-moving traffic or traffic jam. Since speeding is only possible in Germany at night, anyway, a general speed limit could improve the congestion situation. But the Germans love their cars and the mythical Autobahn most of all.

Unfortunately there is no alternative to the road for touring bands, who have to transport equipment, instruments and luggage from club to club. They rely on the highways and have to adjust to the increasingly difficult traffic conditions.

If you book a tour in Europe and have only one driver or just don’t want to spend the whole day on the bus, make sure not to cover more than 500 kilometers between two shows. The distances can be quickly determined thanks to the route function of Google Maps, Open Maps or a navigation system. 500 km should thereby be the maximum limit. Even after 300 km you can already be done in, because you were traveling for a total of five hours, spend two hours of it in a traffic jam or had to sit in bumper to bumper traffic with one screeching halt after another.

Avoid rush hour from 6 – 9 am and 4 – 7 pm during the week; on Fridays it usually starts at 2 or 3 pm. Educate yourself about the holidays of the respective region. Get started in time so you don’t have to race to arrive on time at the club. As said above, racing is difficult in Germany anyway.